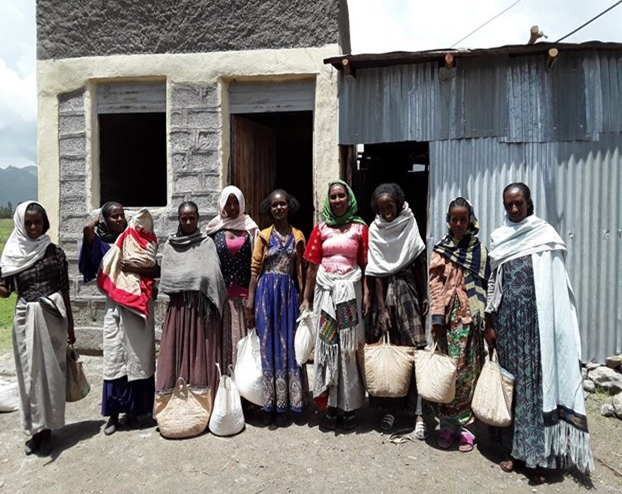 Women farmers in Ethiopia face many challenges in their daily lives, such as inequitable access to and control over land and productive assets, as well as high burdens of household domestic labour. For many women, the COVID-19 pandemic made their situation more precarious and significantly increased their caregiving responsibilities. It became harder for them to spend the time they needed on farming, which had a negative impact on farm productivity, family incomes, food availability and nutrition.

In September 2020, Alinea International received additional funding from Global Affairs Canada for a special COVID-19 response and recovery extension to the Agricultural Growth Program-2 Capacity Development Support Facility (CDSF) project. During the extension period, which lasted until June 2021, Alinea’s project team worked with our Ethiopian public sector partners to deliver a set of coordinated interventions to support women small-scale farmers. This holistic approach aimed to redress challenges such as women’s lower access to veterinary services and agricultural extension, lack of access to resources, weak financial literacy, limited business skills, time, poverty, and lack of power and agency. To demonstrate the approach, we worked with over one hundred informal agribusinesses, known locally as Common Interest Groups (CIGs), most of which were led by women, but also some youth-led businesses with mixed male-female membership. All the selected CIGs had livestock-related businesses: poultry, dairy, cattle, or sheep and goats.

Half of the interventions focused on technical issues. Public and private veterinarians and livestock extension providers were trained on zoonotic disease prevention, and they cascaded the training to the women and youth CIGs, building their livestock health skills. Alinea field staff also delivered business skills training and worked with the CIGs to help them create one-year recovery business plans. Each CIG was then provided with COVID-recovery support funds, that were intended to support implementation of their business plans and improvements in animal health and safety.

The other half of the approach focused on the gender equality challenges, specifically women’s time poverty and lack of autonomy.  For this, we used the AGP2 Gender Toolkit (GTK) and the Women’s Empowerment Manual – both developed by Alinea during the project.

Eight families from each CIG participated in a GTK training. During this training, couples examined who does what in the household, and discussed whether the distribution of domestic, productive, and community-support tasks is fair for all family members. After this discussion, each family develops its own Household Action Plan that documents what changes husbands and older children (especially boys) are willing to make to better share domestic chores and unpaid care work. With their action plans, the families commit to being a “Gender Model Family”. These eight families were also encouraged to share the Gender Model Family concept with other CIG members. The Gender Model Family approach was developed by SEND West Africa and adapted to the Ethiopian context by Alinea under the Small-Scale and Micro-Irrigation Support Project funded by the Embassy of the Kingdom of the Netherlands and Global Affairs Canada.

READ MORE: To learn about the tools used in this training take the GTK e-learning course

CDSF staff and interns provided follow-up support across this holistic approach. They regularly checked in with each CIG to ensure they were able to apply their learning and make progress on CIG business plans, improving animal health and safety, and making changes within their households. At the same time, women CIG members came together in weekly discussion groups focused on the stories and exercises in the Women’s Empowerment Manual (WEM), which are designed to build women’s confidence and their skills to advocate for themselves individually and collectively.

Even in a relatively short period of time, about six months, women CIG members reported that meaningful change was happening in their families.  When first surveyed, only 17 per cent of women rated their spouse’s involvement in household duties as high or very high, and only 13 per cent felt their spouse had high or very high involvement in caregiving. Six months later, those figures had doubled to 34 per cent for household chores, and more than tripled for caregiving to 44 per cent.

Household gender equality also improved in other ways: 85 per cent of women reported that their own involvement in household financial decision-making had improved and 87 per cent noted an increase in their involvement in non-financial decision-making. Nearly all the women indicated that these household changes were having a positive impact on their Common Interest Group. Encouragingly, most male CIG members agreed that the changes being made through their Household Action Plans were benefitting their agribusinesses.