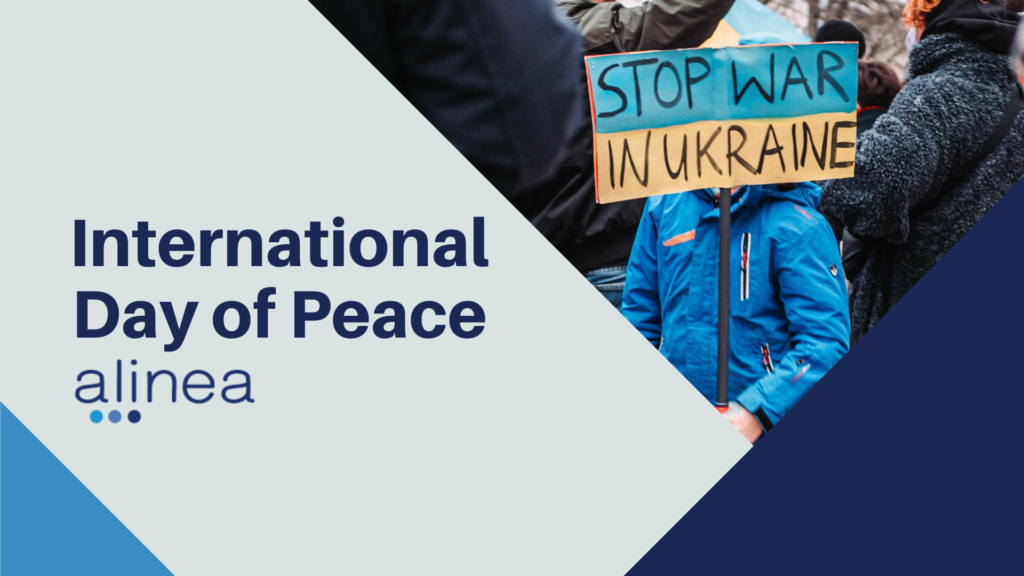 By: Liubov Gordiienko Team Lead of Women, Peace and Security Initiative for the PROTECT Project

September 21st marks the International Day of Peace celebrated globally for over four decades. However, in 2022, in the light of a brutal and devastating war in Ukraine, this date takes on a new significance and heartfelt meaning for each and every Ukrainian.

Established by the United Nations unanimous resolution 36/37, Peace Day provides for “commemorating and strengthening the ideals of peace both within and among all nations and peoples”. As we mark this date, millions of civilians in Ukraine are unable to return home, many are forced to live without access to food, water, health care, and other essential supplies. We are witnessing the biggest migrant flow in Europe since the Second World War. As people continue to flee their homes to seek safety, over 6.9 million people are internally displaced within Ukraine. Regular shelling and bombing of civilian infrastructure, residential areas, evacuation trains, buses and cars, schools and kindergartens, and atrocity crimes lead to thousands of casualties, hundreds of destroyed and damaged towns and villages, polluted rivers, and mined fields.

The ongoing turmoil is revealing further exacerbation of gender inequities and gender-based violence. Since the beginning of the Russian invasion of Ukraine on February 24, Ukrainian governmental institutions, civil society, and international organizations, such as the Prosecutor General of Ukraine, UN High Commissioner for Human Rights, have reported on violations of international humanitarian law, including acts of and sexual violence related to conflict. In the light of these challenges during the war, The PROTECT Program established the Women, Peace, and Security Initiative.

Women and girls, men and boys across Ukraine are encountering the threat of rape as a weapon of war as evidence of sexual violence grows. These events have sharpened the focus on the importance of international law and protocols, such as the Geneva Conventions and Additional Protocols, UNSCR 1325 and related Women, Peace, and Security (WPS) resolutions, and the Murad Code. Preventing and responding to conflict-related sexual violence (CRSV) is one of the key themes under the WPS agenda, and is addressed under Ukraine’s 1325 National Action Plan (NAP 1325).

It is symbolic that in 2020, the year of the 20th anniversary of the adoption of UN Security Council Resolution 1325 “Women, Peace, Security”, the Ukrainian Government took stocks of the first Ukrainian NAP 1325 and adopted its second National Action Plan. But new challenges imply new amendments to security and resilience, including combatting CRSV. For these purposes, the process of the review and update of NAP 1325 in accordance with wartime challenges has been launched by the Government of Ukraine.

The PROTECT Program’s Women, Peace, and Security Initiative is focused on two urgent issues: strengthening the legal and regulatory framework for the identification and documentation of conflict-related sexual violence (CRSV), including NAP 1325, and improving the response of the security and defense sector to CRSV using survivor-centered approaches. Providing consistent advisory support and assistance, Women, Peace, and Security Initiative aims to advance the WPS agenda, enhance the coordination and capacity of the security and defense sector institutions to identify, document, and investigate CRSV, as well as to raise awareness about CRSV and the linkages between international humanitarian law and CRSV.

As the UN Special Representative on CRSV Pramila Patten noted during her visit to Ukraine in May, all crimes committed should be documented and investigated to ensure justice and accountability. At the same time, there is a need for a holistic, survivor-centered approach provided to survivors in Ukraine and abroad.

On May 3, 2022, the Framework of Cooperation (FoC) between the Government of Ukraine and the United Nations on prevention and response to conflict-related sexual violence was signed. The FoC focuses on building the capacity to monitor and report on crimes of conflict-related sexual violence, strengthen service provision, establish referral pathways, reinforce the national institutions’ capacity to ensure accountability for such violations, as well as develop national policies and programs, and build the capacity of defense and security sector to prevent CSRV.

The International Day of Peace serves as an important reminder that atrocity crimes, including sexual violence in conflict, remain unacceptably prevalent. Communities across the world observe this day in different ways. However, an activity that is common is the one-minute silence that is observed at 12 noon. This year, on the International Day of Peace, this global minute of silence would also honor the memory of women, men, children, civilians, and soldiers who have perished since the invasion of Ukraine.