Feature post by By Queentries Regar and Katarina Atalifo with our Alinea team based in Asia-Pacific. 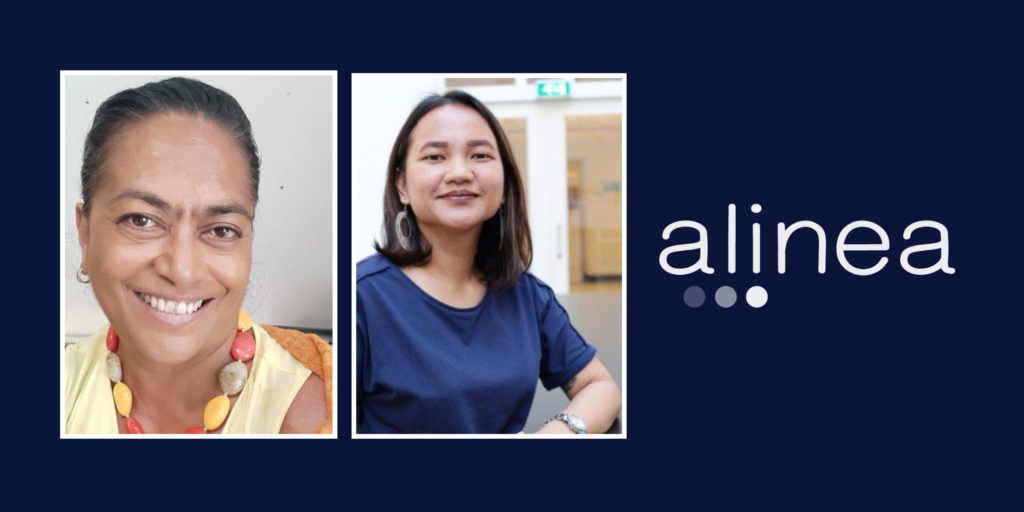 To celebrate International Women’s Day 2022 with its theme of Gender equality today for a sustainable tomorrow, Alinea Asia Pacific staff members Queentries Regar and Katarina Atalifo exchange their experiences and reflections on the advancement of gender equality in local climate change adaptation and mitigation efforts.

Queentries (based in Indonesia) and Katarina (based in Fiji) discuss the importance of recognising and celebrating the significant contribution made by women in conserving natural resources and creating a healthier, more sustainable planet. In parallel, continuous endeavours to include women in the decision-making table is also critical.

Queentries: We know that women and girls face greater vulnerability and exposure to disaster and conflicts, yet they remain largely ignored in developing solutions. Based on your 25+ years of experience working in Fiji and the Pacific, what are some concrete steps for better including women in solution building?

Katarina: Women and girls in rural Fiji and the Pacific continue to demonstrate resilience on a daily basis. In a region battered by frequent disasters, compounded now by the social and economic impacts of COVID-19, women and girls have had their resilience fully tested.

There is a very active programme in Fiji called the Women’s Weather Watch program run by a local women’s media organisation. This has been immensely powerful. The program sends weather reports and preparedness advice by text message to the mobile phones of their 350+ strong network of rural women across the country. The women, in turn, spread the news throughout their often-remote communities, and feed back local conditions and needs to a regular radio show broadcast from Suva. These women help their communities prepare for storms and drought, protect their families when disasters strike, and alert authorities in the capital about the situation in the villages and other important updates like flood-submerged villages or diminished food stocks etc.

Before Cyclone Winston struck Fiji in 2016, women in villages around Fiji made sure their homes were tied down; food was packed away into plastic bags and containers, and crops were quickly harvested and buried underground so the storm didn’t get to them first. Women also left their kitchens and homes to warn their neighbours of the impending disaster, and spread the news to other members of their community via texts.

Homegrown networks like this reflect the true engagement of women in preparing and managing disasters. The best way a woman can contribute to solution building is simple – include her in the planning and designing of climate and resilience programs.

Katarina: Research shows that women and children are more likely than men to die or be injured from a natural disaster . Women living in remote areas, far away from major cities, are even more prone to the effects of climate change disasters. Based on your decade of experience working in Indonesia, what are the possible solutions to ensure sustainability efforts are inclusive and gender-responsive?

Queentries: First of all, we need to acknowledge the great contributions made by women, particularly those who live in remote areas who make up a quarter of the world’s population, in mitigating and adapting to climate change. In my experience working with communities in the eastern part of Indonesia, I have met numerous amazing women’s groups who play vital roles in natural resources management. They have transformed fire-cleared land into community plantations with food crops and herbs, and have even taken the initiative to map evacuation routes in the event of a disaster.

Acknowledging women’s contributions allows us to develop locally driven approaches to sustainability.. As development practitioners, we can be more impactful in policymaking and program implementation by first listening to the communities – including women in remote areas – and appreciating their agency and local wisdom. Let’s avoid projecting our agenda and insisting our ‘knowledge’ upon local women. . Regular involvement of women in the participatory consultation and decision-making process is crucial since any climate change and disaster-related decisions taken without consulting them will put them in a more vulnerable position (remember, more than 70% of people who died in the 2004 Asian tsunami were women). If we are doing climate research, we should apply participatory methods such as Feminist Participatory Action Research (FPAR) to ensure communities and women are involved in setting the agenda, data collection, etc – and not just a passive object of the research.

Katarina: What is your proudest moment in contributing to gender-responsive climate change adaptation efforts?

Queentries: My proudest personal experience was when my colleagues and I developed locally-driven impact enterprise to provide the lowest-cost renewable energy access to rural communities especially women in Nusa Tenggara Timur, one of Indonesia’s southernmost provinces and lowest electrification ratio regions. The solar-powered lights we installed enable women to weave traditional fabrics in the evening and watch TV while children were able to read and study under the bright lamps.

Queentries: Women have continued to play a critical role in rebuilding their communities after a natural disaster. What can be done to better engage women in the important process of rebuilding and reviving community livelihoods post-disaster?

Katarina: Engaging women, girls and marginalized groups throughout the disaster management cycle is imperative for the success of resilience-building efforts in any society. When investing in Climate and disaster resilience programmes, a perfect opportunity arises – that, to promote positive change toward gender equality and appreciate the practicalities of gender-based vulnerability.

At the national level, fortunately, many Pacific governments have learned from the active engagement of women in the response to COVID and the frequent natural disasters, that there is an even greater need to invest in this sector. The best way to engage women in rebuilding and reviving their community post-disaster is straightforward – include them in the planning and design of disaster response, rehabilitation plans. Build their capacity to monitor and take on leadership roles in the response phase. In Fiji, post-cyclone Winston, Fiji’s unheralded frontline disaster responders were women.